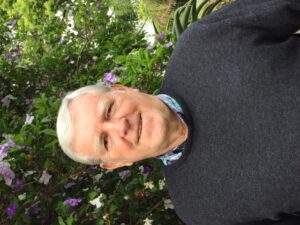 In mid-1976 I received a letter and an invitation from the then headmaster, Dieter Faulhaber, to work as a teacher at the DSD. I said thank you and declined, as I was getting ready to tackle a world trip with a friend.

However, Dieter’s letter was shortly followed by a job offer as Vice Principal from the Chairman, Dr. Fritz Bünger. I accepted and started in Rossburgh in January 1977.

My first impression was a bit mixed. Despite friendly teachers and small classes (you couldn’t have taught in a better setting), I didn’t have my own classroom and everything was a bit makeshift here and there.

My class and I were moved to the teachers’ room, since the small former kindergarten only consisted of 5 classrooms.

My blackboard was a wooden board painted green, which had to be washed after each lesson, as in the old days, with a sponge and water. The enthusiasm and joy of being back in South Africa after several years of teaching in Germany outweighed this somewhat primitive start.

During recess, staff stayed either in the hallway or on the porch in front of the classrooms.

It was clear to the school association, board, parents and teachers – it couldn’t go on like this – because we didn’t have another room available and where should the 7th class be housed next year?!

In a local teachers’ magazine, Mr. Faulhaber read an article about the St. Agnes School, which was founded in 1904 and was to be closed at the end of 1977. He shared this news with the school board, who immediately began negotiations. The move to our new and much larger school building took place and the 7th grade got their classroom in 1978.

After about 6 months, Dieter Faulhaber resigned and returned to Germany with his family.

The board of directors of the DSD commissioned me to take over the management of the DSD and shortly thereafter I became the new principal.

My area of ​​responsibility, as instructed by the board, was to maintain close contact with the three Lutheran congregations and the Catholic Church. We needed students and needed to fill the classes! There were still doubts among the parents whether the DSD was really on par when it came to the level of education compared to the local government schools, the German schools here in South Africa and also those in Germany.

This was a very clear question that we were asked by the technicians and directors sent from Germany, whether their children would find contact in Germany again if they returned after 3-5 years.

For this concern, Dr. Bünger had a solution. He designed the necessary forms. No later than 6 months after our students went to other schools, that school received a detailed questionnaire asking them to report on the student’s progress and grades.

After these reports got here, the teachers and board were informed.

So far, the school had followed the Natal curriculum for the most part. Some German textbooks were also ordered, and each teacher had, for the most part, the liberty to decide what they taught.

Before I left Germany, I bought the necessary teaching materials. Since there is freedom of teaching materials in Germany, as a teacher I could order anything I wanted from the various publishers for free. This is how the curriculum from Baden Württemberg came to the DSD.

One of my first tasks was to draw up a curriculum of the most important subjects for our school, especially with regard to the seamless reintegration of the students not only in Germany but also in Austria and Switzerland. This curriculum consisted of a combination of the Natal curriculum and the Baden-Württemberg curriculum.

Accordingly, we also ordered the textbooks for all classes – from class 1 to 7. With small classes and good teachers, our students in Europe have always been successful. Later, when our students wrote their matrics here, many of them were in the “top ten”.

The all important money

The new school had everything we needed, except for a sports field. We had SPACE!

But with that, our expenses also increased and of course with the many new textbooks, musical instruments and other learning materials that we ordered from Germany.

Our loyal and regular donors in Germany were kept informed of the status of “their” school by letter, which the Trust’s secretary, Eva Gutschmidt, had been doing for 40 years. But we had to show our donors that we also do something. So it came about that the DSD organized a so-called slaughter festival. Our new chairman, Roland Fritsch, was a master butcher and knew where to get the best meat, and the parents’ association organized the festival with a German brass band.

Since we wanted to save the cost of renting a hall, the school’s courtyard was covered with a tent and small rubber balls were scattered on the concrete floor to serve as a dance floor. At around 5 a.m., the last guests were ‘asked’ to go home, because cleaning up began at 8 a.m. – after all, everything had to be clean and in order for the lessons on Monday. The slaughter festival became more and more popular. 445 guests was our record.

At Easter, our so-called Easter Festival/Bazaar took place. So we kept looking for more ways to raise money for our school.

As many know, you don’t have to pay a penny for school fees in Germany. It’s different in South Africa.

During my school career, my parents had to pay quite a bit so that I could go to the German School in Johannesburg. Later I went to a government school where the tuition was R4.00 a year – a more or less symbolic contribution.

The parents of the DSD had to dig deep into their pockets from the start, because the DSD received no financial support, neither from the South African state nor from Germany.

All inquiries, requests and promises for funding came up empty. The board couldn’t force the parents to pay more tuition…and the teachers had to be paid. It was Dr. Bünger, who in turn, tackled this matter professionally. In Germany, an e.V. (registered association) was founded, letters for financial support were sent, and slowly some money came together, which was then managed by the “Von Falkenhausen Trust”.

Walter Drewes, tax and accountant, managed the money together with the board of the Von Falkenhausen Trust. Today there is no school in South Africa that does not charge tuition. 30-40 years ago, you could buy a house with today’s school fees at other schools… fortunately not at the DSD.

In order to “feed” the school with children, the board decided to set up a Kindergarten. The necessary structural changes were made by Armin Vach, member of the board. Walls 480mm thick had to be broken through. Our first kindergarten teacher, Gisela Spreemann, started in 1979 with a small group of 11 children. The group kept growing, so after 2 years we hired a second specialist.

German as the language of instruction

I think very few people know that all German schools in Kwa-Zulu Natal have permission to teach German as the language of instruction for all subjects in the first 4 school years.

This privilege was won by the Natal and Southeast Transvaal Schools Association (SAG) when the government tried to abolish this privilege, which had existed since 1910, in the 1960s.

The SAG made representations to the then First Minister John Vorster, who then continued to grant this right to German private schools and German community schools. The law still exists today.

It soon became clear to me that we wanted to be a German school with a South African influence. Our students should experience the best of both countries. The German language, mathematics and regional studies as well as good English/Afrikaans. After some years we were even able to offer French and Zulu.

But it was also important to give the children a certain South African school culture, so that when they go to secondary school from the 7th grade, they at least know what an “Interhouse Gala” or an athletics competition divided into different so-called ‘houses’ is.

With our first swim festival, the school was then divided into two ‘houses’ or groups to compete against each other. Trophies were donated, and you swam for your house, either ‘Haus Max’ or ‘Haus Moritz’.

On a cultural level, each class and its class teacher had to make a contribution to the annual ‘Bunter Abend’. Even the little ones in the Kindergarten loved performing on stage. The parents were proud when their child was allowed to recite or sing something, and they were there with their cameras and video devices.

Another highlight of the school calendar was the ‘prize distribution evening’. The best students were recognized and given prizes. Trophies were donated for the best in the class, and the best student in the 7th grade got his/her name immortalized on a trophy.

So we started introducing South African customs and passing them on to our students, but not neglecting German.

Today I am happy to have been a small cog in the development of the DSD. I’m happy that the school has moved out of the city hustle and bustle into one in a quiet area. I am happy that the school is growing. I am also happy to be invited today, be it to distribute prizes, to auction the students’ art to their own parents or to roast the good German bratwurst at the Easter bazaar. It makes me happy when I hear about former students who struggled in math class and are now engineers, master carpenters or computer engineers.

However, the greatest joy is when I can greet my old students at the DSD when they take their children to school or at general events.

Our school is a very good school. For 50 years, many have worked hard on the thing – GERMAN SCHOOL.

Another 50 years is not impossible. I wish the same for our school! Thank you to you, our donors, because without your regular contribution we would not be able to celebrate our 50th anniversary this year… Every penny helped!

Die Förderer der DSD is a organisation that was founded to support the Deutsche Schule Durban financially.