THE DSD AT THE DSD

Last year 18 scholars in grade 8 & 11 wrote the exams for the German Language Certificate I & II (DSD I & II). We are very proud of our learners, all of whom passed!

And a special mention goes to Stefan Friedrich und Felix Kroeber, the best of each year, who passed with 92 and 93 out of 96 points respectively. Well done!

Yesterday we had a small ceremony to hand out the certificates and to express our admiration for the effort put into the German classes by our learners and their parents. Every Monday evening High School students (mostly, but not exclusively, DSD alumni) gather at the DSD to continue German SAL as an extra subject up to matric.

The German Language Certificate is an official proof of German language proficiency, is organised and recognised by the Federal Republic of Germany and is extremely valuable for our learners for future studies, scholarship and job applications in a German speaking country as well as in South Africa. 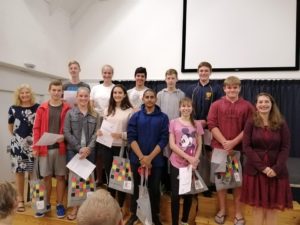 Die Förderer der DSD is a organisation that was founded to support the Deutsche Schule Durban financially.